They weren’t kidding when they said I had seen more of Tokyo in a week than they had as residents of two months. Here are some Polaroid postcards for when their working hours come back down to earth.

When I first met her, my friend Caro was in college working as a waitress at Makiman in Bonn, Germany. It wasn’t the first sushi restaurant I had ever visited, but it was the first one I ever called “my sushi place.” Even after she moved away, her visits to Bonn always included a trip there with her friends.

From the balcony at Caro and Fabian’s.

When she and her boyfriend, Fabian, announced they were being relocated to Tokyo for work, dreams of a trip east began taking shape in the minds of their friends and family in Germany. I happened to be the first to book a ticket.

I dropped in on Caro and Fabian just two months into their stay of three years. Stressed and overworked, adjusting to a new life and new jobs in foreign country – what better time for a week-long guest!

Thanks to their insane working hours, they haven’t had much time to really settle in and explore the city. They both took a work-related trip back to Germany this week. I bet the comforts of home will be especially appealing when compared to the thought of finding some degree of normalcy in a city that, for an outsider, seems to get more foreign by the day.

With the certainty that Caro and Fabian’s life in Tokyo will eventually start to feel comfortable, and that work won’t always cast a shadow over every waking hour as it does now, I’d like to remind them during their trip home to Germany of all the awesome things waiting for them in Tokyo when they get back.

Several spray options. Heated seats. “Privacy noises” played from a speaker. All at the touch of a button. Nothing tops a Japanese toilet.

It’s been a long day at the office. You’re beat. You’re ready for an episode of Dexter (Caro and Fabian’s fave at the moment), but before you settle in on the couch, you head to the kitchen, reach in the freezer, and pull out a carton of purple sweet potato ice cream. It’s OK to add a third scoop before you hunker down in front of the TV.

I knew this guy was running a hip spot as soon as we walked in: too many songs by “The Band” were on the bar’s playlist for it to be a coincidence. He offered to play us a Japanese song, strapped on the guitar and a harmonica, and let it rip. Here’s his first number:

Caro, if you go back often enough, I’m sure he’ll learn Ed Sheeran for you. 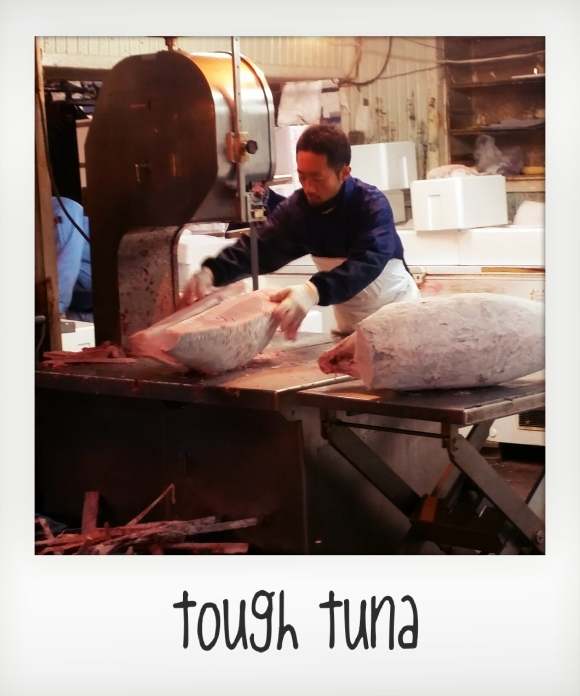 The Tsukiji fish market reminded me and my friend Dave a little bit of Pike Place Market back home in Seattle. Stalls and vendors selling fish, fruit and vegetables, with some restaurants and other odds and ends mixed in. Wandering behind this part of the market, we came upon the big fish warehouse where the wholesale fish trades are made.

The sales were done for the day, but workers were still there cleaning stalls, balancing the books, and packing shipments on ice in Styrofoam containers for trips to far-flung seafood restaurants. We ended our tour at a sushi place around the corner from the entrance to the warehouse. Worth a visit, and keep your eyes peeled for the gigantic frozen chunks of tuna being cut in half by a band saw.

A word of caution to Fabian – the volume of gaming options available at Akihabara “Electric City” could put a relationship in jeopardy. Original Nintendo and Super Nintendo consoles (or Famicom and Super Famicom in Japan), classic and modern arcade games, and a vast collection of titles I’ve never heard of.

I could have spent more on video games than I spent on my plane ticket. Instead, I kept it in check and came home with a deck of “Legend of Zelda” playing cars and two Mario Bros. coasters.

Start a trip to the neighborhood with the toy and games department at Yodobashi-Akiba, then head to a gaming store called Super Potato. Then just get lost in shop after shop of gaming goodness.

You can’t talk about gaming in Japan without mentioning manga and anime. In Akibara, I found several stores dedicated to manga and anime literature, videos, card games, and figures (some of it innocuous, some of it racy). There were literally thousands of characters, but one sticks out in my mind.

My first encounter with Hatsune Miku came on the sidewalk outside of an electronics store. A TV display outside the store was playing a concert DVD, and I paused for look. Thousands of fans in a Japanese concert hall were holding green glow sticks in the air, swinging them forward and backward along with the music. On the stage, a woman with two long neon green braids that extended past her waist was in the midst of what was, judging from the crowd, one of her hits.

She pranced along the stage, skipping left and right, stretching her arms toward the crowd as she sang. Her moves were quite lifelike, but her features were a little too perfect. It took two or three close-ups for me to realize she was an anime hologram. She was backed by a real band playing on the side of the stage, and the crowd was singing along just as if she was a real pop star.

I looked her up later and learned what millions of people already know: Hatsune Miku is an international celebrity who tours the world.

Caro and Fabian, if you ever go see her, can you get me her autograph?